Meet the Huntsman spider that took down a possum

Have you heard there’s a new spider in town with a thirst for possum blood? 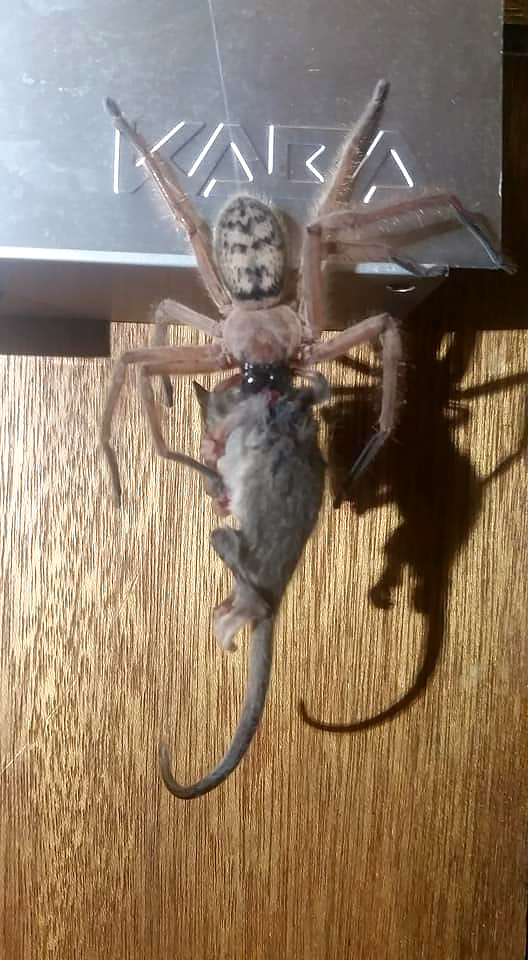 A mutant spider? A bloodthirsty mammal killer on the loose? A Huntsman spider the size of a hubcap rampaging across Tasmania? (Photo supplied by Justine Latton)

Yesterday I was interviewed by Jules Schiller on ABC Drive (you can listen here just after 1:45:10) on the topic of the possum-killing Huntsman spider which has recently fuelled nightmares across Australia and beyond. “Are Huntsmen evolving into bloodthirsty meat-eaters?” Jules asked. “Will they come for us in our sleep?”

Well, Huntsman spiders have never exactly been vegetarian, but deep breaths everyone – no mutant spiders feature in this story.

These photos first appeared on our radar – spidar? – on the 15th of June when Justine Latton shared them with the Tasmanian Insects and Spiders Facebook group. Her husband Adam snapped the incredible shots at a lodge in Mt Field National Park, showing a Huntsman spider chowing down on a similarly-sized Pygmy possum. 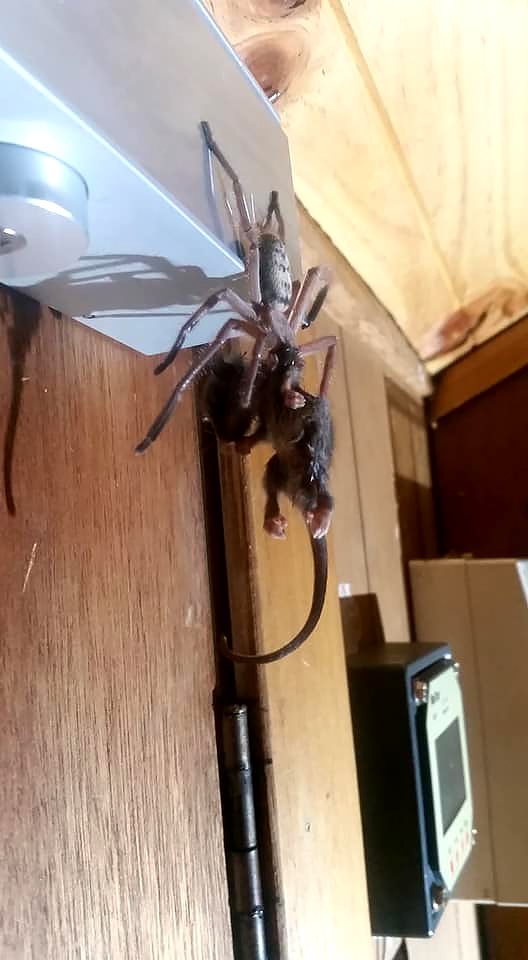 This epic battle is on a smaller scale than it might appear. (Photo supplied by Justine Latton)

“They were investigating a squeaky door and Adam noticed the not-so teeny duo not thirty centimetres from his mate’s face,” Justine said. “They had to catch the pair and release them outside, in order to open the door!”

“No spiders were harmed in the relocation effort (too late for the possum),” she added.

Who are the combatants?

Many commenters thought the photo must have been faked, or that the mammal hanging from the spider’s fangs was a small mouse. Nope –  this is really happening.

According to conservation biology professor John Woinarski speaking to the Guardian, the Pygmy possum in question is most likely the Eastern Pygmy (Cercartetus nanus), which the Australian Wildlife Conservancy says weighs “less than a golf ball”. All in all, it’s more of an entrée than a main for most predators – so what about the spider?

The Huntsman is a species known as the Social Huntsman (Delena cancerides). This species is widespread across the southern half of Australia, including Tasmania and into southern Queensland. It’s the star of the 1990 horror film Arachnophobia, was introduced to New Zealand where it’s called the “Avondale spider”, and was one of the first 250 species included in our Spider identification app Spidentify. 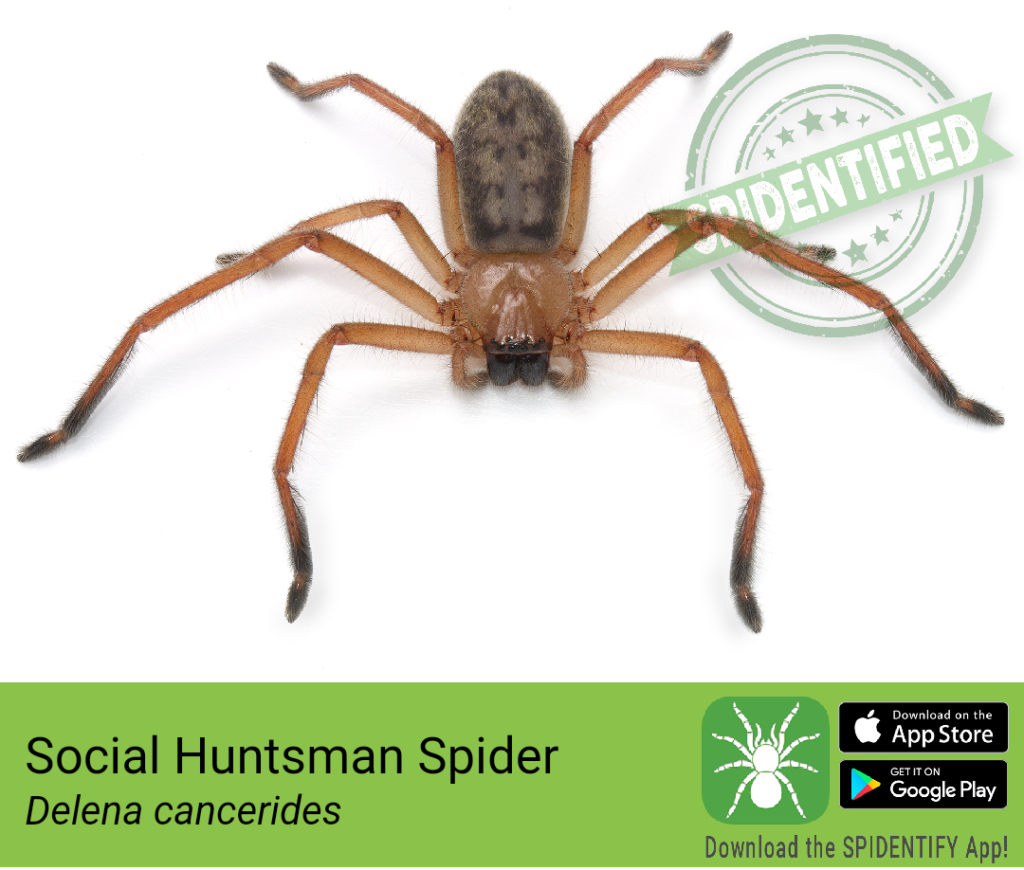 A quintessential Australian, the Social Huntsman Spider (Delena cancerides) is common throughout the south and even ventures into houses. (Photo: Spidentify)

While this is certainly not the largest Huntsman species in Australia, the adult spiders can reach an impressive size with legspans of over 14cm. It’s no dinner plate but it’s no spider featherweight either!

What’s particularly impressive about these spiders is that they usually don’t come alone. Social Huntsmen are famous for living in colonies of up to 300 siblings of various ages, watched over by a single large matriarch. They recognise their own family members and peacefully cohabitate underneath peeling tree bark (more peacefully than most human siblings), even sharing prey between multiple spiders.

Are Huntsman spiders out for blood?

Huntsmen are wandering hunters, which means they don’t use a web snare or a silk-lined burrow to catch their prey. At night they emerge from their daytime hides (usually tree bark, but sometimes rock crevices or curled leaves) and find a good place to sit and wait for prey to approach. When they sense something nearby of appropriate size, they pounce. If instead they feel threatened, they’ll hightail it to a different hunting ground or take a flying leap for safety.

The usual diet of a Huntsman spider consists of small invertebrates, including cockroaches, moths, and anything else that crawls up a tree. However, they are not specialist feeders and will take on anything they can subdue, including small vertebrates. Geckos, frogs and mice have all been spotted in the jaws of these acrobatic spiders – and now, possums! 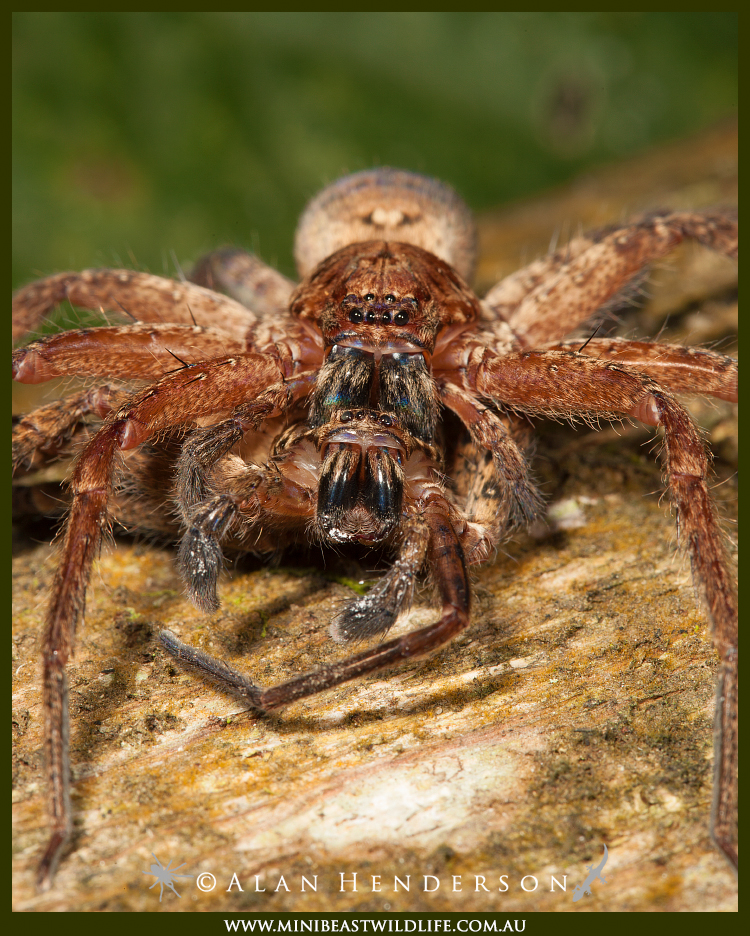 Huntsman spiders are not fussy about what they eat, as long as they can catch it. Here is a female Jungle Huntsman (Heteropoda sp.) feeding on an ex-boyfriend.

Spiders eat liquified food, beginning the digestion process outside the body and either mashing their meal until it can be sucked up or slurping out the insides. They’re not fussy about how they get it, as long as it’s not so large it puts them in danger. Something the size of a person is never on the menu for spiders. The only time they will bite a person is purely out of self defence – never because they’re particularly peckish. So no need to panic – we won’t be seeing spiders hunting puppies or children any time soon.

But you must be an incredible predator to take down a possum, right?

True, Huntsman spiders are impressive predators. They use a combination of senses including extremely sensitive hairs to detect prey even in absolute darkness, and can leap with incredible accuracy and speed to take down their quarry. This explains how they can ambush something like a gecko, frog or possum – but they’re certainly not top of the spider food chain. 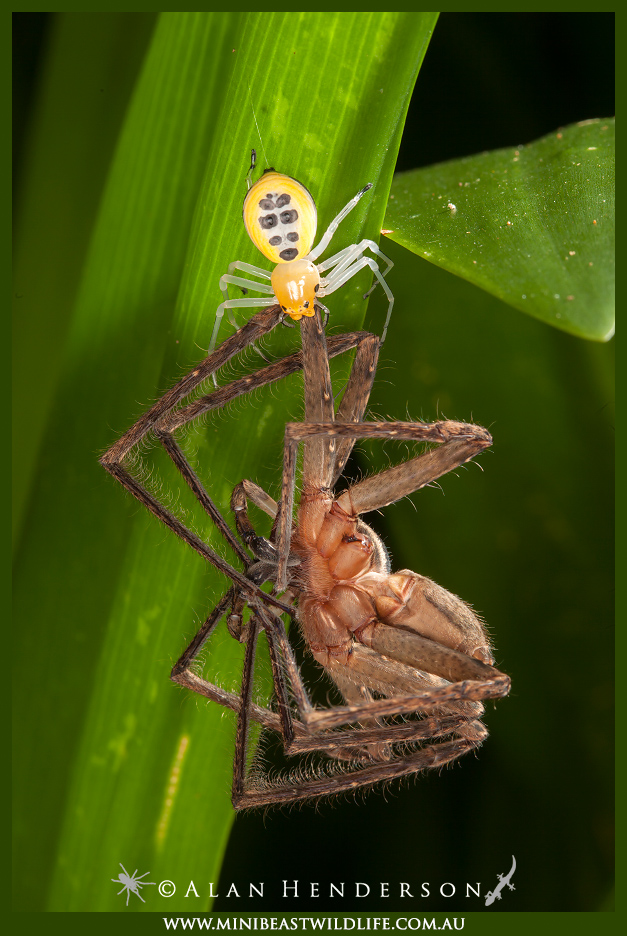 The difference in size between predator and prey here is far more impressive than between Social Huntsman and Pygmy Possum!

One known predator of Huntsman spiders is, in fact, several times smaller than its own prey. The Ornate Crab Spider (Poecilothomisus speciosus) lives in Queensland, and is known for its impressive ability to ambush, and even potentially lure in, spiders far larger than itself. If the Huntsman was to achieve a similar feat, we’d expect to see it taking down cats!

To learn more about Huntsman spiders and the Ornate Crab Spider, download the Spidentify app by Minibeast Wildlife.