The backyard master-builders that work by night and rest by day. 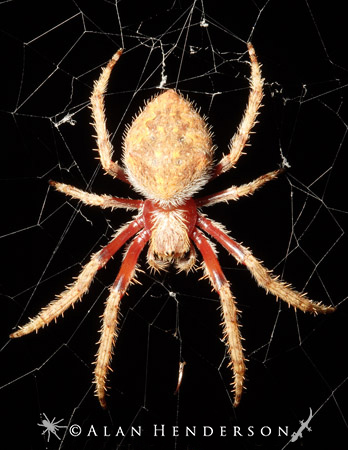 spanning your path or driveway? Maybe you haven’t had such a sticky experience but have a resident spider that builds its web in the same spot each night and removes it before daylight. If so, you may have met a Garden Orb-weaving spider (Eriophora sp.), common inhabitants within gardens throughout Australia.

Garden Orb-weavers are harmless spiders and are fascinating to watch as they construct their intricate webs. The web is a classic round ‘orb’ web, which is suspended in a position that is likely to be a flight path for insects.

One thing that often perplexes people is how they get their web from one place to another. The answer is simple – the air carries it. When the spider is ready to build a web, it moves to a high vantage point, puts the tip of its abdomen in the air, and releases a steady flow of silk from its spinnerets. The silk is so light that the slightest breeze will carry it, and it will float on the wind until it snags against a solid object. The spider continues to do this until is has a line attached to a suitable site. Once the spider has this initial line in place, it can move out along it to build the rest of the web.

Unlike some other spiders which construct a web and stay in it both day and night, Garden Orb-weavers remove the web at dawn each day, and construct a new one each night. The reason for this is predator avoidance. 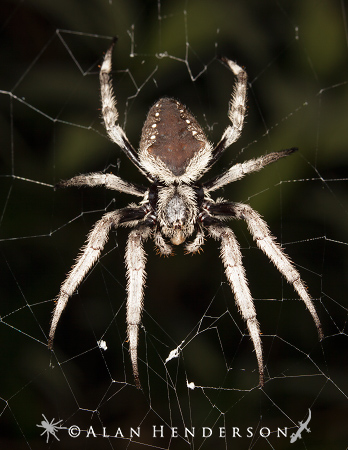 Garden orb-weavers would be easy prey for hungry birds, so they have developed the hide-by-day strategy. Although the main ‘orb’ part of the web is gone during the daylight hours, some of the structural lines are often left in place, and the spider usually shelters at a point where these meet a tree, house or fence.

The camouflage of the Garden Orb-weavers is excellent when they are in ‘day-time’ mode; their compact, mottled brown bodies and tightly folded legs look just like a bump on a branch.

At night these spiders take on a completely different look, spreading their legs out in the ‘ready’ position as they sit in the middle of their web. The upper joints of their legs (which are hidden during the day) are exposed and are usually red in colour.

Their web is designed to catch flying insects, and the most common at night are moths and beetles.

When prey strikes the web, Garden Orb-weavers move like lightning – they must. If they give a struggling insect time to thrash around in the web, it will usually free itself, so speed is of the essence. Once the spider reaches the prey it will wrap it quickly with copious amounts of silk in bandage-like form, before biting it and returning the central hub of the web.

Like all spiders, Garden Orb-weavers can only eat liquid food, so the indigestible solid parts of their insect prey are discarded and dropped to the ground below the web.

Breeding takes place during the summer months when males seek out the females within their webs at night. A male needs to be particularly careful because if he blunders straight onto the female’s web, she will most likely treat him as a nice meal! The strategy is to woo her with a carefully plucked silken serenade. The male will pluck threads of silk which identify him as an interested suitor, and gradually move towards the middle of the web. Males are much smaller than the females, and this may help them in reaching the middle without jiggling threads the wrong way.

After mating, the female will lay her eggs in a silken egg sac attached to a nearby structure. These will usually hatch a month or so later. Eggs laid in later summer may hatch the following spring, but by this time the mother will usually have died, as their brief life ends the winter after they breed.