Funnel-webs are the subject of fear, fascination and myth. They are a group of Australian spiders belonging to the family Hexathelidae. They include some of the most venomous spiders on the planet and are generally shiny black spiders with a distinctive appearance. For assistance identifying funnel-web spiders, check out our Spidentify app. 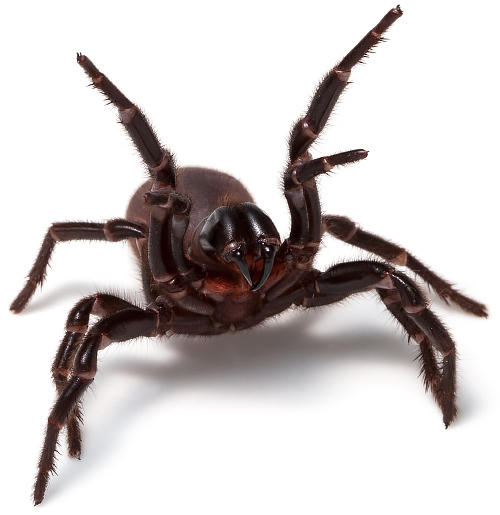 Despite there being around 40 species, the most well know and notorious species is the Sydney Funnel-web (Atrax robustus). Prior to the development of the antivenom in 1980, 13 human deaths were attributed to the males of this species. Male Sydney Funnel-web have a component in their venom which the females lack. This toxin known as Robustoxin (d-Atracotoxin-Ar1) is the chemical that makes these spiders so dangerous to humans. For some unknown reason, this chemical affects primates (humans and our relatives the monkeys and apes) severely, but has relatively little effect on other mammal species. The other unfortunate part of this equation is that Australia’s most populated city was founded in the heart of this spiders’ natural habitat. Despite the distribution of these spiders and toxic venom, since the development of the antivenom the real danger of these spiders has greatly diminished. There have been no deaths as a result of Sydney Funnel-web bites in 35 years, yet the fear of these spiders remains extraordinarily high within Australia. It is certainly a case where the perceived danger far outweighs the real risk, and some perspective is required. Few people fear motor vehicles which have caused almost 70,000 deaths in Australian within the same 35 year period. 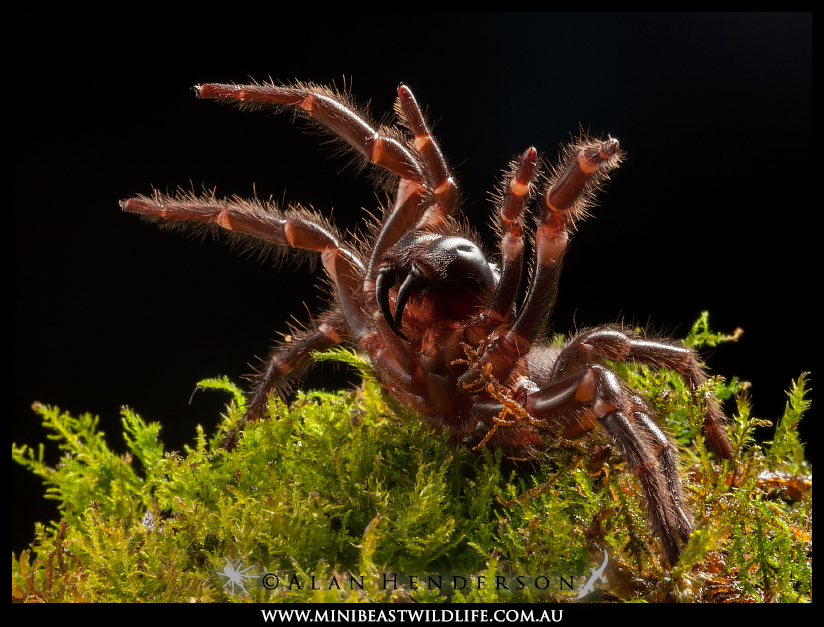 A Sydney Funnel-web (Atrax robustus) in a defensive pose. 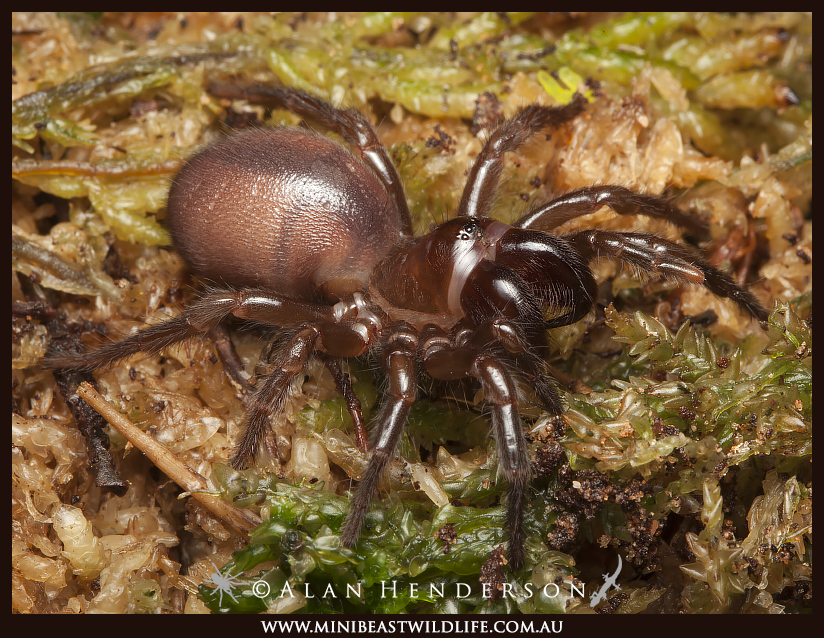 Funnel-web spiders are ambush hunters and live within silken retreats either underground, or in the case of a few species, within hollows and crevices in trees. The majority of species are found in relatively moist habitats such as shaded gullies in forested areas. Species are spread from South Australia (Adelaide Hills) through areas of Victoria, Tasmania and up the east coast into Queensland. They Sydney Funnel-web (Atrax robustus) is confined to radius of about 160km around Sydney itself. Most ground dwellers will occupy naturally occurring spaces beneath rocks and logs, and line the interior with silk. Many species have multiple entrances which are tube-like openings of silk, usually with some distinct silk strands (trip lines) connected to them. These lines alert the spider of the presence of prey when they are hunting. Insects, spiders and small vertebrates such as lizards and frogs are taken by funnel-web spiders. The prey is simply ambushed and overpowered, bitten and dragged back inside the retreat to be consumed. 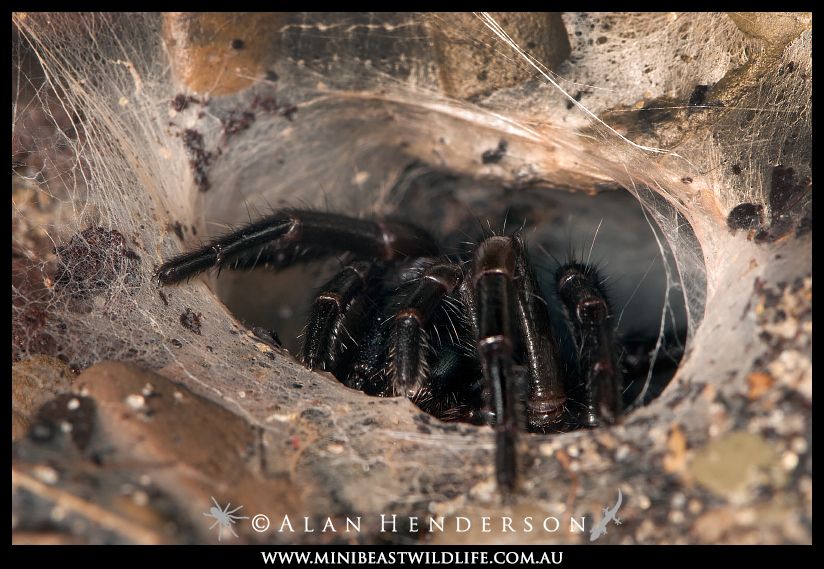 A funnel-web in a hunting position at the entrance to its retreat. 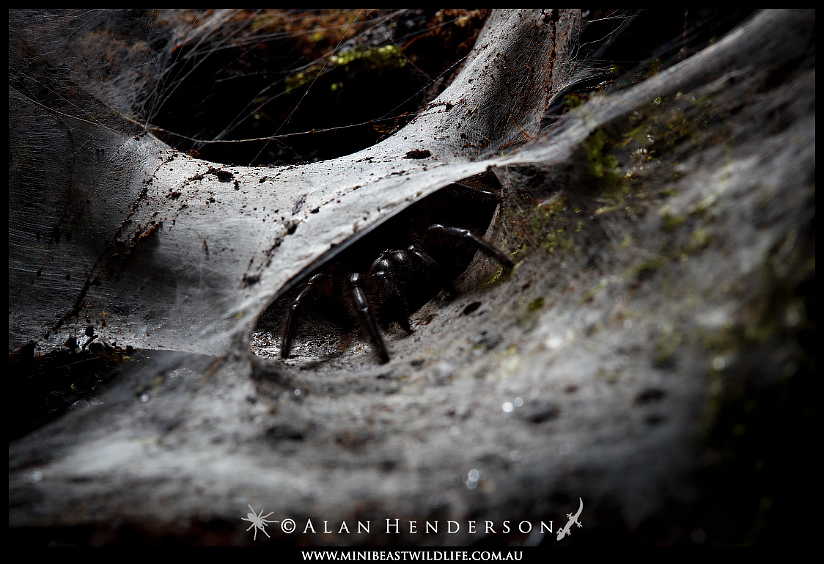 A Sydney Funnel-web (Atrax robustus) ready to ambush prey at an entrance to its burrow. These spiders will often have multiple sock-like entrances like this one.

The approximate distribution of funnel-web spiders within Australia. The Sydney Funnel-web (left) and the various funnel-web species together (right).

Regardless of their fearsome reputation, in nature these spiders don’t have it all their own way. They have their share of predators, even some which will take them on within their lairs. Centipedes are expert funnel-web predators, and will readily enter the retreat, attack and consume the occupant. Outside their retreat, funnel webs are far more vulnerable and wandering spiders have a whole spectrum of hungry animals quite willing to deal with them. These include birds, small mammals and reptiles. 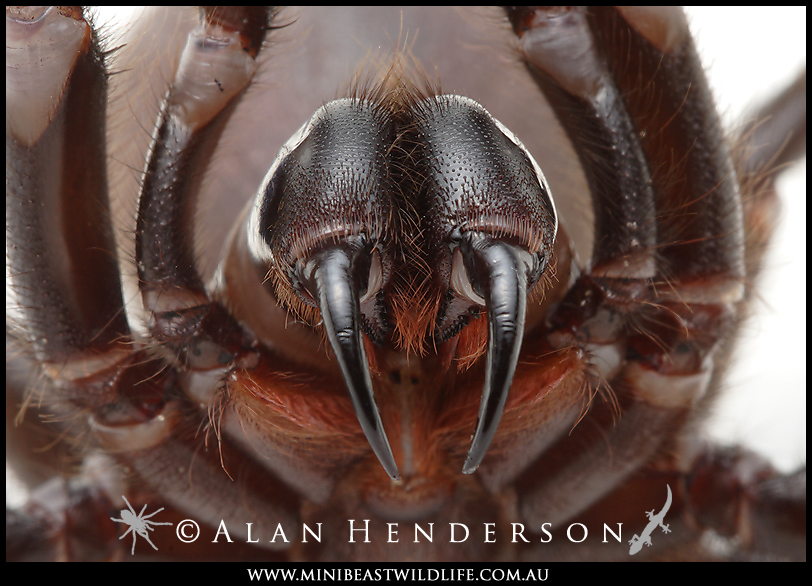 A close-up of a Sydney Funnel-web with the fangs exposed.

Funnel-web spiders are super-sensitive to vibrations in order to hunt in the manner they do. Approaching human footsteps are usually enough to send these spiders scurrying deep back inside their secure homes. They are certainly not looking to take on anything our size. Human encounters are usually as a result of people digging the spiders up accidentally, or with male spiders that are roaming looking for mates during the breeding season.