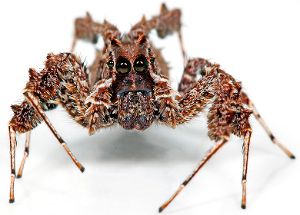 Portia fimbriata, known as the Fringed Jumping Spider or often just as Portia is renowned as the world’s most intelligent spider. It is a spider hunter which modifies its hunting strategies and learns from situations as it encounters them. 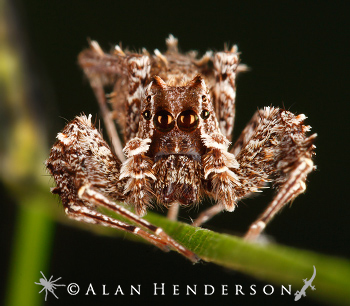 When it comes to calculating hunters in the bug world, nothing comes closer to the mark this diminutive jumping spider. This tiny assassin not only takes on targets bigger than itself, it plots how to do it.

Portia fimbriata is a jumping spider found in the north eastern part of Australia. It is a specialised hunter, only feeding on other spiders. It is unusually camouflaged, and has clusters of hairs protruding from its body giving it an ‘unspider-like’ shape. In fact it looks a little like a piece of debris and it certainly uses this to its advantage.

Portia hunts by stalking other spiders, usually those that build orb webs. The amazing thing about this species it that it uses a number of strategies to approach and attack its prey. More amazingly, if one method doesn’t work it will switch to another. 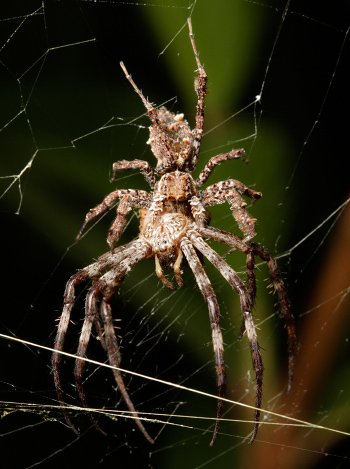 Like other jumping spiders, Portia has excellent eyesight. When prey is first located Portia will assess the situation make an approach which gives it the best chance of capturing the other spider, and will used different method for different species of prey. This may involve actually losing sight of the intended prey as it begins the slow and stealthy attack which is very unusual for invertebrate predators.

One method utilised by this hunter is to move to edge of an orb-weaver’s web and pluck the web with its legs to lure the other spider closer. A Portia will sit for hours tweaking and plucking tiny vibrations to gradually lure the unsuspecting owner of the web into checking out the source of the vibration. If it gets no reaction it will alter the type of vibrations it produces, testing time after time until it gets a result. If the orb-weaver senses the assassin’s presence it will back off, and make another approach some time later.

Sometimes a Portia will simply creep onto its victim’s web, step by step, millimetre by millimetre, taking hours and sometimes days to make its way close enough to its intended prey. Portia spiders have also been known to lower themselves down by a silken thread adjacent to an orb web to make their approach. Which ever method is used, the goal is to get close enough to an orb weaver to make a rapid attack. The Portia will leap onto the unsuspecting spider and deliver a lethal bite. Even though the victim may be many times the size of Portia, the jumping spider’s venom is potent enough to kill it inside a minute or two. Once a kill has been made Portia will take it’s fill from its prey, any leftovers are a bonus for scavengers.

Identify these and other Australian spiders easily with Minibeast Wildlife’s new Spidentify app!