Flies are everywhere; we see them almost every day. Some pester us inside our houses, some hassle us by the BBQ, and others just seem to be doing their own thing. In fact, Australia has an estimated 30,000 species of these insects with less than a quarter of these described by scientists so far. The majority of these small animals are completely oblivious to us, and are occupied with things that go unnoticed by humans. 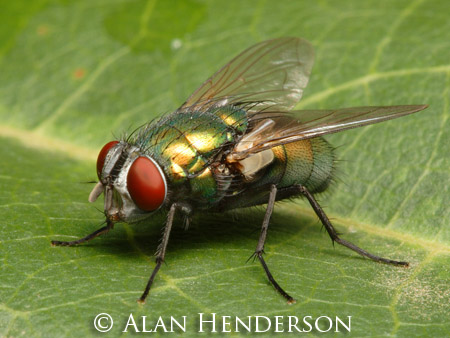 The introduced Australian Sheep Blowfly, one of the very common flies in Australian rural areas.

Flies belong to a group of insects called Diptera; insects with two functioning wings. Most lap up their food with special sponge-like mouthparts. Many will ‘vomit’ digestive
juices onto their food then sponge it back up. Others however, are not so repulsive and have piercing and sucking mouth parts – such as the mosquitoes, Sandflies and March flies.

Although we tend to see these insects as pests, they do play some critical ecological roles such as
recycling and pollination. Without blowflies, the amount of dead animal carcasses (particularly on road sides) would be overwhelming. Flies also help to control other species. Some species are predators, feeding upon other insects. However, many more are parasites, being much more subtle in their attack on other animals. Many  parasitic species have a particular ‘host’ animal which they favour, and somehow manage to lay their eggs upon unsuspecting individuals. Even fierce predators like spiders and praying mantids that rely on flies as part of their diet are often parasitised by them. The host being unable to defend itself as maggots slowly consume it from the inside out.

Many people have marveled at flies without even knowing it. The glow worms in caves and rainforest areas are actually fly larvae, which use unique methods to catch prey by luring it towards their sticky thread traps with beads of light.

There are however several fly species in Australia that have significant economic impact. The Australian Sheep Blowfly (oddly named as it originated from South Africa) causes an estimated 280 million dollars damage to the sheep industry each year. Fruit flies such as the Queensland Fruit Fly and the introduced Mediterranean Fruit Fly in Western Australia threaten our fruit industries, and a great deal of money is spent each year controlling them.

All in all, although we often find flies difficult to live with, we certainly could not live without them fulfilling their roles in our ecosystem.

Check out some fly images at Minibeast Wildlife’s Photography site.