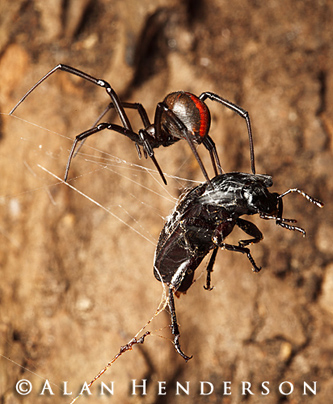 A Redback’s best weapon is its sticky silk. It uses ‘combs’ on its hind legs to rapidly draw silk from its spinnerets and cast it over its prey.

There is probably no spider better known in Australia than the Redback. It lives Australia wide, is more common around us than in the bush, and is the subject of many myths, fables, and even has had a song penned in its honour.

The Redback spider certainly does have very potent venom; so much so that the tiny amount it delivers is capable of killing a human if not treated. These days however, the real danger of ‘death-by-Redback’ is extremely low. We have had antivenom for Redbacks since 1956, and since then no human fatalities have been recorded. Bites are still very common, and the effects are very painful, but the venom acts on humans quite slowly.  There’s is always plenty of warning and time to seek treatment. Only the female is capable of delivering an effective bite on humans. The males are very small (3-4mm long) and light brown with white markings – very different than the classic appearance of the larger female.

The web of Redback spiders at first glance appears to be a tangled mess with no real system or method. In reality it is a finely engineered trap, constructed purposefully to capture small crawling animals. The web consists of two distinct components and always connects with the ground (or some other base). It may be created in a very small space, or span distances of up to 50 cm. The upper component of the web provides structural support for the trap and usually includes a thickened area of silk where the spider lives. This is also where the spider will create and suspend its yellow-white egg sacs. The lower component of the web consists of a number of vertical trip-lines. Each line connects with the ground under great tension, and is adorned with droplets of liquid silk which acts as an instant glue for any small creature that touches it. Once the spider has built its trap, it makes its way to the upper area of the web and simply waits for what might be weeks or even months until food arrives. Intermittently the spider will check the web’s integrity and touch up the trip lines with fresh droplets of the silken glue. 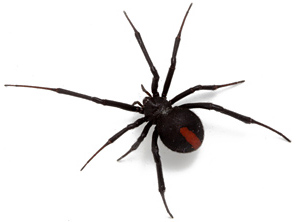 The sites in which these spiders construct their webs are usually well traveled paths used by animals such as beetles, slaters, cockroaches, crickets, and an array of spiders. When any of these bump one of the trip-lines they become stuck to it via the droplet of silken glue. Struggling not only alerts the Redback that dinner is served, but often detaches the vertical silk line from the ground. This then pulls up suddenly and can either act to tether the struggling prey, or in some cases, catapult it upward into the network of silk lines above.

When the Redback first confronts its prey it does not bite it. It turns around, backs in and throws line upon line of sticky silk upon the animal to completely disable it. This method relies upon the incredible strength of the silk and not the power of the spider. The spider will not approach to bite until the prey is sufficiently bound so that it cannot attack. Once they prey is bitten and venom is injected, the spider hoists it into the upper reaches of the web to feed. This is another feat of engineering as it connects and disconnects a multitude of silk lines in sequence to achieve the lift. This method of capture enables Redbacks to prey on animals far bigger than themselves. Small snakes, lizards and mice have all been reported being found strung up in Redback webs.

The strength of Redback spider silk makes their homes very easy to identify compared with other flimsy ‘cobwebs’ of other spiders in the garage or under the house.  The silken lines are noticeably hard to break, and always under tension. These spiders like dry dark places, and whether it be an old tire, or under the workbench, they find our homes very good haunts to construct their perfect traps.

Identify these and other Australian spiders easily with Minibeast Wildlife’s new Spidentify app!