Australian Bull ants Myrmecia spp., are one of the most 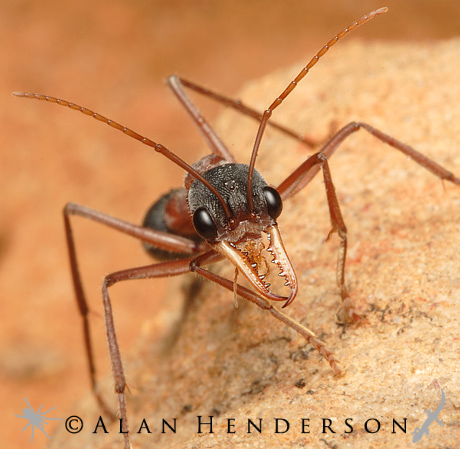 spectacular ants in the world. As far as ants go, bullants
are the giants.

They are the largest ants in Australia, with only a few species which rival them in other parts of the world. They are instantly recognisable by their huge mandibles on the front of their heads, and a long, slender body. There are almost 100 different species of bull ants, all but one are endemic to Australia. New Caledonia has a single rare species.

Bull ant colonies are relatively small, with numbers of individuals in the low hundreds rather than thousands like many other ant species. They have a fertile queen whose sole role is to lay eggs, and infertile female workers who carry out all the work required to keep the colony alive. Seasonally, fertile male and female (new queen) bull ants are produced. These have wings and leave the nest to start new colonies.

Of course, bull ants are a very well known ant. Campers and bushwalkers are acquainted only too well with the insects by way of the painful stings bull ants can inflict while defending their nests. They can be extremely aggressive when defending their nests, and have excellent eyesight enabling them to locate intruders. Many people who are stung 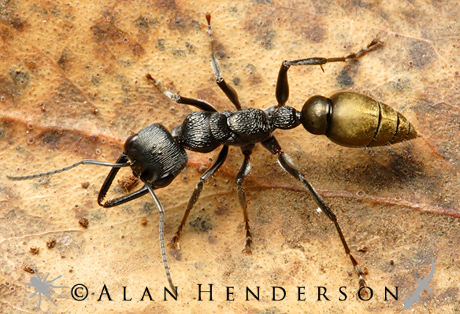 believe the large mandibles inflict the pain; however, it is a sting located in the abdomen that causes this severe discomfort. Bull ants can sting multiple times – just like wasps – and use this for capturing insect prey as well as for defense.

They are active by day and night, and the workers forage over long distances on their own rather than in trails like many other ants. Workers collect insects which they overpower and sting, taking them back to the nest to feed the young. Despite their large jaws, the adult bull ants feed mainly upon sugars such as nectar from flowering plants.

Bull ant ‘babies’ are called larvae. They are helpless, small white grubs which are kept deep in the nest and are tended to by the workers as they develop and grow. Dead and paralysed insects are brought to them to feed upon until they are ready to pupate. Pupation is the same process a caterpillar goes through to ‘metamorphose’ into a butterfly. Bull ants do this within a brown paper-like case or cocoon. When the adult bull
ants emerge they are fully formed, but just a little lighter in colour than their older counterparts.