One of the most common snail species in Australia is the introduced Garden Snail. Despite its pest status, it is quite a remarkable animal.

When was the last time you looked at a snail closely? Snails are one of those animals that 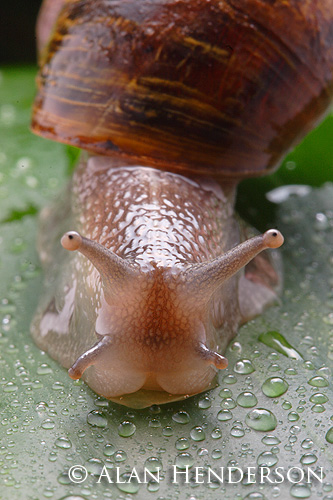 people often encounter but don’t tend to appreciate the sheer complexity of the way they work. The humble snail is quite an incredible little animal, one which operates very differently than we do!

Even with a drought upon us, most of us still have healthy populations of snails in our gardens. Unfortunately the local species which shares our appreciation for the plants we grow is an introduced snail; the Garden Snail Cornu aspersum is from Europe. Nevertheless, this foreign pest is still a fascinating creature in it own right.

The first sign of movement from a snail is usually the emergence of the head followed by a tentative extending eye-stalk or ‘tentacle’. Land snails have two pairs of tentacles, with eyes on the tips of the longest pair. The ability to turn your eyes inside out is not something I aspire to, but it is an amazing adaptation to protect their eyes and is a great space saver. The eye-stalks actually invert when they are withdrawn – just like a rubber glove being pulled back inside itself. Even as their bodies are still emerging, snails can start to move off, although as we know, this is not exactly with a jolt of acceleration. The top speed of a Garden Snail is around 0.048 km/h. Still, their unique method of sliding along on a single ‘foot’ while releasing a bed of low-friction mucus is perfect for their way of life, but does require a humid or wet environment to avoid drying out. Cruising this way has its advantages; you can travel anywhere; upside down, and also over sharp objects. A snail can slide over the edge of a razor blade without cutting itself!

Sharp teeth? Surely not, however it’s exactly what they have – and hundreds of them. Snail teeth or radula as they are called, are tiny and attached to their ribbon-like tongues. Snails’ 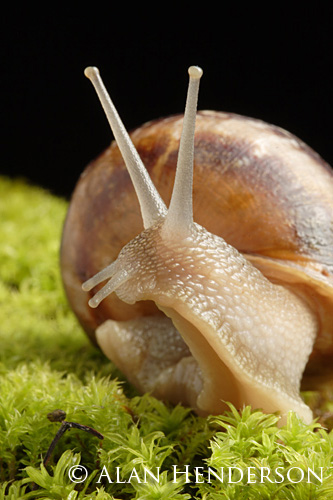 teeth are shaped to suit their particular diet.

Although we know all too well the diet of the Garden Snail, Australia has many native snails, which in the case of many other native animals much prefer to stay in their natural habitats. Australia’s biggest species occur in Queensland, some with shells up to 70mm across. Australia also has many species of carnivorous snails that chase down worms, slugs and other snails in a slow motion battle to the death.

Snails are hermaphrodites; they are equipped as both a male and female. It still takes two to tango, but the odds are a lot better of finding a mate! After mating small clear or white eggs are laid in a moist position. Baby snails have very delicate shells, often a different shape than the adults, but it changes as they grow.