The high-rise engineers of the ant world

Green Tree Ants (Oecophylla smaragdina) will be familiar to anyone who resides in, or has traveled into the northern parts of Australia. They are one of the most visible and dominant species of ants in many areas of the north. As long as there are suitable trees to nest within they are also quite at home in disturbed areas and have taken much of our environmental modification in their stride. They are relatively aggressive and do not hesitate to swarm over a perceived threat to their nests, biting fiercely as they do. To add to the pain, they squirt acid from their abdomen into the bite site to ensure the intruder knows who is boss. Many an innocent tourist has been covered with these ants just by brushing a bush as they walk by, and instantly begun to perform the hopping and slapping ‘Green Tree Ant Dance’, which is a sight to see.

Green Tree Ants construct their homes in the trees using a remarkable method of insect engineering. They create nesting chambers from leaves which are pulled together through the cooperation of many worker ants. Once they have the leaves in position, another wave 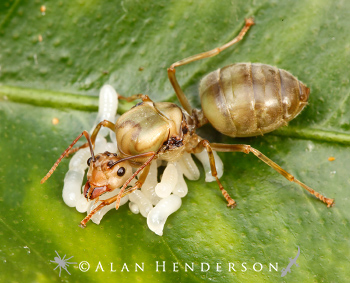 of workers appear with young grub-like larvae in their jaws. The ant larvae produce silk and are used by the worker ants as tools to bind the leaves together. The workers carrying larvae move to and fro, binding the seams of the leaf nest with precision, whilst the other workers patiently hold the leaves in place. The entire construction may take several hours to complete. Although the colonies have a single queen, they may ultimately expand to have many nest sites throughout a single tree, or even adjacent trees, which the ants travel between. These super colonies can contain tens of thousands of ants, and the various nest sites will have different functions. Some may store larvae and pupae of different ages, others will simply house workers, and of course one will house the queen and will be fiercely protected. The ants tend to prefer living leaves forming their nest chambers. As the silken leaf clusters die off the ants will scout for a new location and repeat the construction process.

Nest building is not the only unique talent of these high-rise ants. They can also build bridges and ladders using their own bodies as the structure. If there is a particular branch

they need to reach below them, rather than walking the long way round they can construct 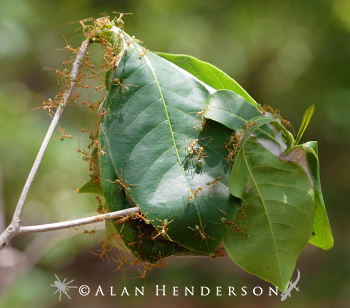 A Green Tree Ant nest – leaves woven together with silk.

a dangling chain of ants. With hundreds holding onto one another, they bridge the gap with incredible cooperation. Once they reach the branch below, other ants will use the living structure to walk across. Of course, this is not a permanent structure, but allows effective temporary access to a spot otherwise difficult to get to.

These remarkable ants have also taken to an insect-form of farming. They actively protect and tend-to several species of caterpillars, various leaf hoppers and other sap sucking insects. The ants are in turn rewarded with sugary secretions produced by the farmed insects known as honeydew. This is a rich food source and a valuable commodity for the ants.

Green Tree Ants constantly seek food for their colonies, which means travelling far and wide. If an insect is not on their ‘protected list’ it is fair game. They can overpower a wide variety of small animals, predominantly insects and spiders, then drag them back to their nests. They will also clean up the carcasses of larger vertebrate animals. On some occasions they have been observed dragging small dead birds and reptiles into the trees to be dismantled and fed to their larvae.