The Spiny Leaf Insect is a species of stick insect, also known as Spiny Stick Insects. They belong to a well-camouflaged group of insects called phasmids. Spiny Leaf Insects appear more like dead leaves than sticks. They blend in well and are very hard to spot in the wild as they hang motionless from foliage. Their diet is fresh foliage just like other phasmid species, and are found in the north east of Australia, where they feed on a variety of plants types in the wild. 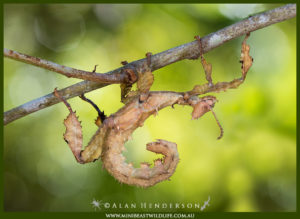 They have a very interesting reproductive cycle, beginning with the eggs being tossed individually by females from the trees down to the forest floor. The eggs look very much like plant seeds. They are often collected by ants and stored below ground in their nests which also protects the egg from predators. 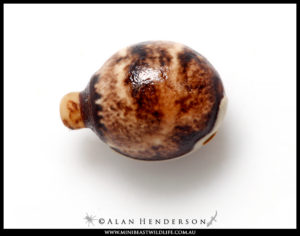 After hatching, each baby Spiny Leaf Insect (nymph) must make its way to the surface and into a tree. Nymphs mimic the appearance of an ant at this stage of its life. This doesn’t fool ants, but does fool other animals such as birds which don’t like eating ants. As a result, their appearance enables them to run around and climb up trees with a reduced risk of being snacked on by a bird. 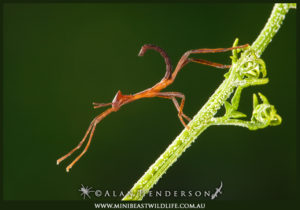 Once settled in suitable trees, the nymphs begin to feed on leaves. After a couple of days the ant mimic colouration (black and red) fades and the nymphs takes on a more cryptic colouration to match their habitat.

While they will ‘fatten up’ visually, due to the constraints of an outer skeleton (exo-skeleton) a special process is required to actually grow. This process is called ecdysis or moulting, and is the shedding the exoskeleton. The insects emerge while expanding their new (still soft) exosketon to achieve growth. Once expanded it will harden in the air at its new enlarged size. Males will do this five times, and females six times to reach maturity.

The insect needs to hang unimpeded beneath a leaf or branch to moult successfully . This can take 10 minutes to half an hour. During their final moult males develop fully usable wings and hold their abdomens straight to accommodate them. Females only develop tiny unusuable wings and cannot fly. They also retain the curled up posture and have spines along their backs for the duration of their lives.

One of the most surprising thing about the life cycle of this insect (and most other phasmids) is that they are parthenogenetic. This means that females can reproduce without mating with a male. If this occurs, the female will produce offspring which are effectively clones of herself.

Spiny Leaf Insects make fascinating educational pets and are extremely popular. They are easy to keep and can be obtained from Minibeast Wildlife’s Bugshop along with information about keeping them and suitable enclosures and equipment. 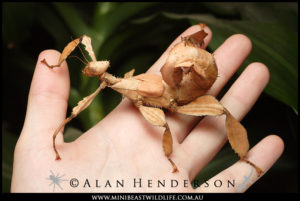