Minibeast Wildlife has plenty of resources to help you with keeping a wide range of live invertebrates. Our book ‘Bugs Alive! – A Guide to Keeping Australian Invertebrates’ is the most comprehensive book of its type that covers Australian species. We have a range of simple Care Guides relating to the species we sell in our online Bug Shop, and equipment and supplies to help with all your bug keeping needs.

Below are FAQ’s relating to the most commonly kept groups of invertebrates in Australia.

My phasmid isn’t eating the leaves I give it.
Try a different species of leaves, or even the same species form a different tree. You may also want to try putting a few different kinds of leaves in the enclosure at once to find out which species your stick insect likes best.  Sometimes phasmids may be happy eating a particular species for a long time, and then suddenly go off it. This may be due to seasonal changes in the chemicals within the leaves. It is important to always be sure that you phasmids are actually eating what you are feeding them.

My phasmid isn’t moving much
This is normal. These animals rely on camouflage to protect themselves, and movement risks them being spotted by predators. When they do move, most sway back and forth whilst walking. This is behavioural camouflage, and makes them look like a leaf or twig being moved by the wind. Not moving much is also a good way to conserve energy.

My phasmid has lost a leg – will it grow back?
Phasmids lose their limbs as a form of defence, a process called autotomy.  It can grow back a lost leg if it is still a nymph with two or three growth stages ahead of it. Limbs are regenerated in stages when the insect moults. Usually, the leg reappears as a stub or tiny curly leg the moult after the loss occurred. After the next moult the leg will be fully formed but is usually noticeably smaller than the other legs. After a third moult, the leg may be very similar to the others in size and form. Adult phasmids cannot regrow their legs.

My phasmids keep losing their legs when they moult
Leg loss during a moult can occur for several reasons; those listed below are the most common in captivity.

My phasmid has laid hundreds of eggs, why won’t they hatch?
In continuous warm conditions (22 – 26°C) the eggs of most Australian phasmids will begin hatching around three months after being laid.  If you do not have the eggs in an incubator and they experience some cooling, then the incubation period will often be extended. Some eggs will enter a state called diapause where they do not continue to develop until they are stimulated by other factors. Favourable seasonal conditions such as warming and increased humidity are often the stimuli they require. Minibeast Wildlife has recorded Extatosoma tiaratum eggs hatching three years after being laid, when they experience seasonal cooling.

Soaking the eggs briefly, then warming them with increased humidity is a good way to stimulate hatching. 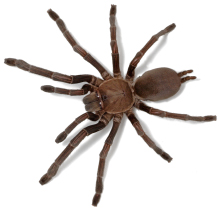 My tarantula is hiding most of the time
This is normal. Tarantulas are ambush hunters and spend most of their time in the wild hidden in burrows and only come to the surface to hunt at night. In captivity they will be a little more confident and sometimes sit out during the day, but younger specimens are often quite timid and will only venture out at night. Check in on your spider at night, and you will often see it out ready for for food.

My tarantula won’t eat and isn’t coming out of its shelter
Assuming your enclosure and conditions are suitable as per our Care Guide, if your spider has gone off its food and is suddenly become more secretive there is a good chance that it is approaching moulting (ecdysis). Tarantulas typically stop eating a week or so prior to moulting and will take about the same period after moulting to regain their appetite. If you suspect your spider is going to moult, do not leave live food insects in its enclosure as they can harm your spider during the vulnerable moulting process.

Should I handle my tarantula?
We don’t recommend handling Australian tarantulas for a couple of reasons. Handling these spiders risks the spiders health. Smaller specimens may escape and die as a result of being lost inside a house. Larger specimens can seriously injure themselves or die as result of falls from as little as a metre from the ground. The spider doesn’t benefit at all from being held, so it is an unnecessary risk to its well being. While Australian tarantulas are not dangerously venomous, larger specimens can give a painful bite.

What size food should I feed my spider?
In the wild various species of spiders will take on a great variety of prey of different sizes. When capturing prey, there is always a risk that the prey animal could injure the spider while defending itself by biting, stinging or kicking. In captivity, most people use crickets or ‘Woodie’ cockroaches as food for spiders. This insects have hard mandibles and depending on size, are capable of injuring pet spiders. For this reason (to minimise risk), we recommend that food insects be 1/3 the body size of the spider just to be safe.

My scorpion hasn’t eaten in a week – should I be worried?
Most likely not, as scorpions can go a long time (months without food), so a week or two isn’t a problem at all. Most people over feed their scorpions in captivity so now and then they simply need a break! It is a good prompt to reevaluate your conditions to ensure you are providing the necessary items, and correct temperature, humidity and substrate moisture. If the substrate has dried up, or the temperature has dropped this may cause the scorpion to stop feeding. If all is well, it has been eating regularly and has suddenly stopped it could indicate that it is approaching moulting (ecdysis). Scorpions typically stop eating a week or so prior to moulting and will take about the same period after moulting to regain their appetite. If you suspect your scorpions is going to moult, do not leave live food insects in its enclosure as they can harm your spider during the vulnerable moulting process.

My praying mantis is scared of its food!
This can happen if the food insects being offered are too big for the mantis. Young mantids can be particularly timid, so we recommend food insects about 1/3 the body size of the mantid to be safe. Not wanting to eat (and running away from live food) can also be an indicator that your mantid is approaching moulting (ecdycis). Mantids typically stop feeding a day or two prior to moulting and resume a day or so afterwards. Live insects can interrupt the moulting process which can result in the death of your mantid, so remove any live insects from the enclosure promptly if the mantis isn’t interested in feeding.