Earwigs are a misunderstood group of insects, largely due to their bizarre name. 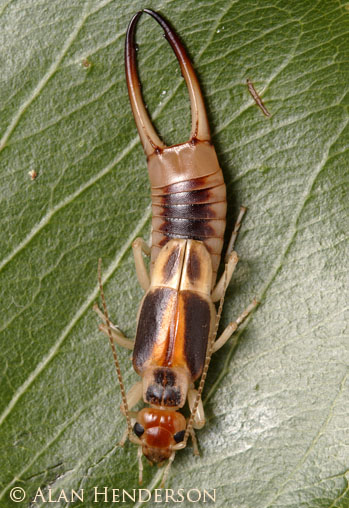 Myths and exaggeration surrounding animals are common, particularly when it comes to the ‘creepy crawlies’ such as spiders, insects, and snakes. Often their abilities are overstated or behaviours are simply ‘invented’ which cause people to fear or loathe them. The Daddy Long-legs spider has become well known for its supposed ‘highly toxic’ venom, which in reality it does not have. Snakes are reported to bite their tails and roll down hills chasing victims, becoming ‘hoop snakes’. In the insect world, one of the best myths surrounds the earwig. It apparently crawls into our ears to feast upon our brains while we sleep! Well, this could not be further from the truth.

Earwigs are omnivores – they will eat both plant and animal material – however, humans are not on the menu. Many species of earwig are particularly partial to pollen, and can be commonly seen at night moving from flower to flower to feed. As such, they play important roles as pollinators alongside bees, albeit doing the night shift! Earwigs are also scavengers and feed on all sorts of bits and pieces, including cleaning up the mini-carcasses of dead insects. Some earwigs are predators and use the pincers at the end of their bodies to capture small insects.

Australia has almost one hundred species of earwigs, including several introduced species. Two common species which are often encountered are the native Brown Earwig (Labidura truncata), and the European Earwig (Forficula auricularia ). Like many introduced species, the European Earwig does occur in large numbers at times, and can be seen on flowers at night and under objects in the garden during the day in plentiful supply. In these situations it can be a pest and damage young plants, whereas the native Brown Earwig is regarded as beneficial in the garden and is known to attack pests such as the Codling Moth.

Like many insects, earwigs are most active during the warmer months, and it is during this period that breeding takes place. Both sexes look similar, but males can be distinguished by their enlarged pincers. 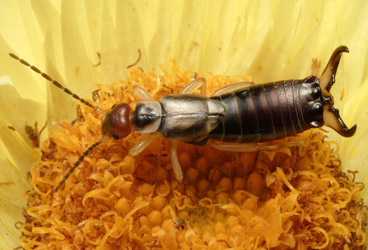 Once mated, female earwigs lay eggs in a confined space or chamber either underground or within hollows in wood. The mother will remain with the young for quite some time after they hatch; the tiny babies being miniatures of their parents.

Despite their fearsome appearance, earwigs are completely harmless. Since they are not venomous in any way, the worst they can do is give you a weak pinch – and even doing that is quite difficult for many species.

Many other animals enjoy earwigs as part of their diet. Frogs, lizards, spiders, praying mantids, ants, and some birds feed on earwigs regularly, and hence earwigs play an important role in food chains.