These fast running hunters, armed with heavy duty mandibles,
are the lions and cheetahs of the insect world. 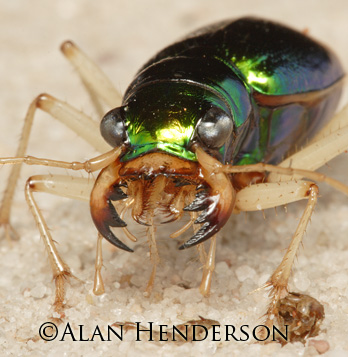 The massive jaws of a Green Tiger Beetle, Megacaphala australis.

When it comes to fast runners, tiger beetles take the crown for the fastest insects on our planet – and it is an Australian species which holds the record. Cicindela hudsoni can travel at about 2.5 metres per second – equal to about 350km/hr on our scale. In fact, tiger beetles run so fast that they actually lose the ability to see once they start moving. They have to visually lock on to their prey first, or run in short bursts to re-orient themselves as they chase their food. Either way they are so fast, their prey stands little chance of getting out of the way in time.

Tiger beetles are pure predators, and feed on any smaller insect or spider that they happen to spot. They are found throughout the world with only a few places where they are absent: Hawaii, Antarctica, the Maldives and Tasmania. We have many species in Australia, most occurring in the dryer parts of the country.

As well as speed, tiger beetles are equipped with some serious weaponry. They have enormous jaws (mandibles) for their size, which are used for crushing and cutting prey. Their mandibles are like long curved swords with daggers sticking out of them. There is no mercy for the hapless prey of a tiger beetle; on capture it is dismembered as it is consumed. As if this doesn’t sound gruesome enough, tiger beetles ‘spit’ digestive juices onto their prey as they are chewing it to start the digestive process before they suck up the liquid mush. 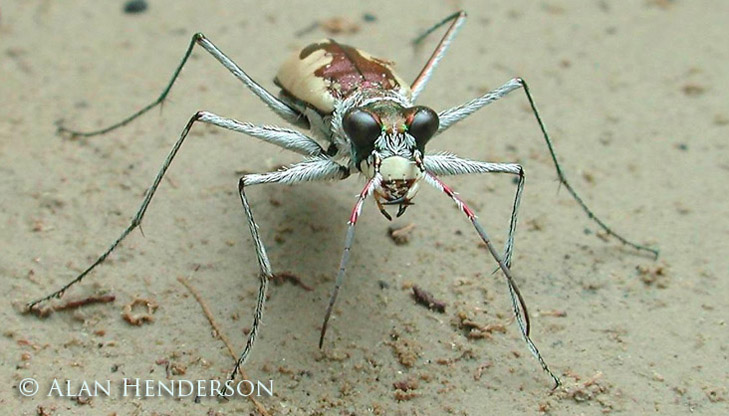 A Grey Tiger Beetle, Cicindela sp.. These tiger beetles are the fastest insects on six legs.

Tiger beetles’ eyes are highly important to them, and their eyes are very large for that reason. Like other insects, they have compound eyes, and the size of their eyes gives them a wide area of view. This allows them to easily locate the movement of their prey.

Although some tiger beetles like to move around at night, many are active in the heat of the day; particularly in hot weather. Some are common on beaches where they run so quickly that they can be confused with sandflies.

Young tiger beetles are called larvae and are hunters like their parents. In some ways, they are even more savage than the adults. The larvae are grub-like, with huge heads and powerful mandibles.

They construct tunnels in the ground and wait just below the surface for small animals to pass by. When they sense something close to the entrance, their head snaps upward like a miniature steel-jawed trap and drags the helpless prey into the tunnel to be eaten.

Although their eating habits do not sound entirely endearing, many tiger beetles are quite elegant in their appearance. These have intricate patterns on their elytra (modified wing covers) and others are iridescent purple, blue and green, and rival butterflies for their colour and beauty.