Australia has an estimated 160 species of praying mantises. They are found in a wide range of habitats from the dry deserts to the lush rainforests. Size various enormously from minute species living upon termite mounds to giants in the tropical northern forests. 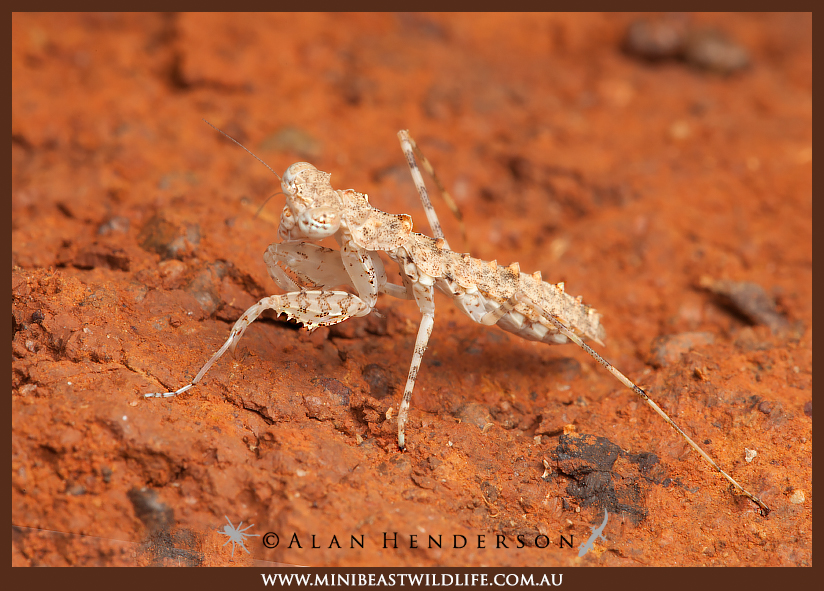 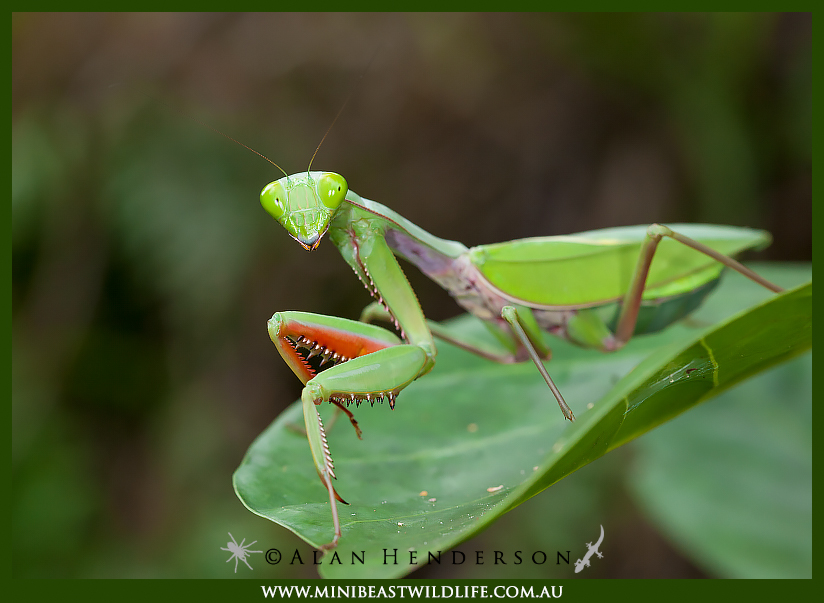 A Giant Rainforest Mantid (Hierodula majuscula) from the tropical north

Praying mantises are predatory insects that use their powerful raptorial (prey catching) front legs to snatch and hold other small animals. While the smaller species predominantly feed on insects and other invertebrates, the very large species will sometimes capture small vertebrates such as frogs and lizards.

The name ‘praying’ originates from the pose they hold their front legs in – as if they were praying. This name is sometimes confused with the fact that they capture prey and are erroneously referred to as ‘preying’ mantises. Some mantises belonging to the family Mantidae are referred to as mantids; many of Australia’s species belong to this group and hence can be referred to as either praying mantids or praying mantises. 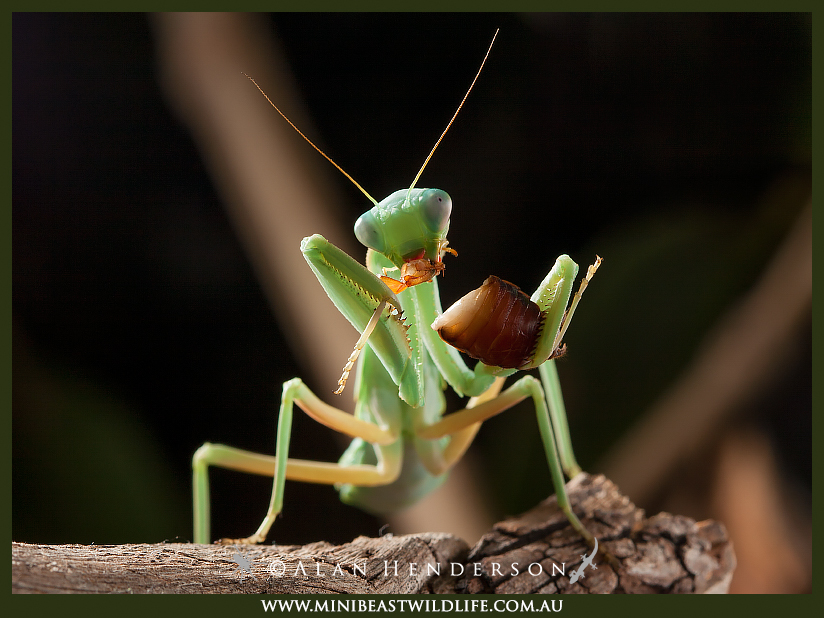 Another major feature of this group of insects is their large prominent compound eyes. Having large eyes set well apart is important for praying mantises as it enables them to accurately judge distance in order to effectively strike their prey. A noticeable dot is present in each eye which is known as the pseudo pupil – not a real pupil like ours. Through optical illusion it appears that the mantis is always looking at you, which may be a useful deterrent to some of the mantises own predators. Praying mantises also have three simple eyes on the top of their head called ocelli. These aren’t important in prey capture, but may allow the mantis to detect they time of day by the presence of various wavelengths of light. 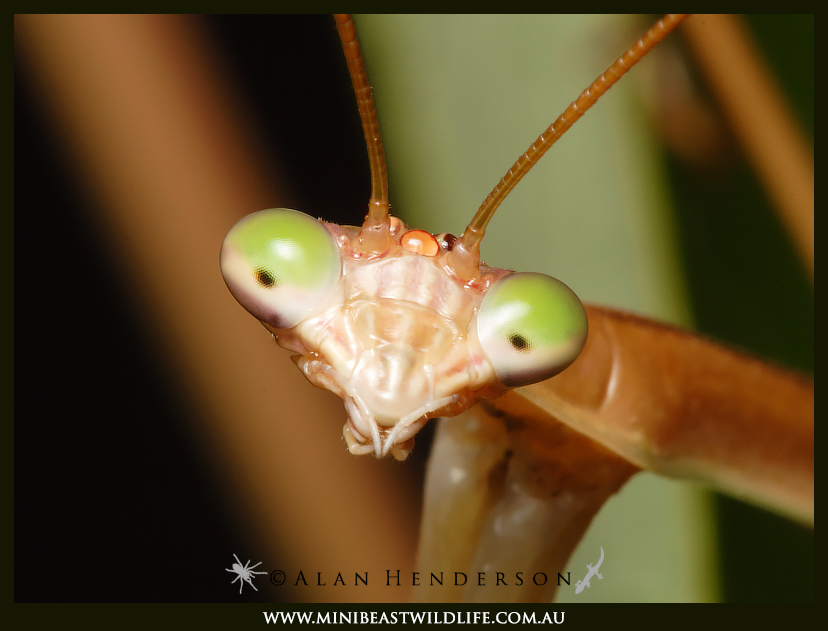 The face of a Purple-wing Mantid (Tenodera australasiae). It has two large compound eyes and three simple ocelli are on the top of its head.

Praying mantises are egg-laying insects and lay their eggs within a protective case called an ootheca. Each ootheca contains a number of eggs, up to 200 with some species. Mantis eggs can take anywhere from 40 days to around five months to hatch. The tiny hatchlings emerge as worm-like larvae and almost immediately moult their exoskelton to become tiny functional mantis nymphs. These nymphs are tiny replicas of the adults, but lack wings. They are predatory and within a day of hatching are looking for their first meal. They grow by shedding their exoskeleton many times, ultimately maturing into the adult form. Only adult mantises have wings, but not all species are able to fly. Generally the males are the best flyers, using that ability to locate females in order to mate. 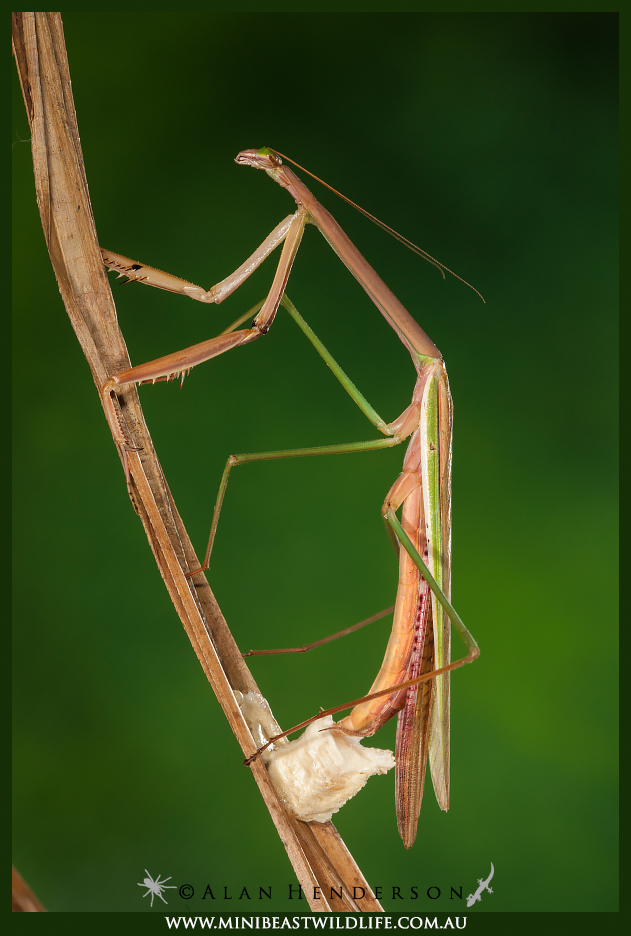 A Purple-winged Mantid (Tenodera australasiae) laying eggs. The ootheca is initially soft and foamy, but quickly hardens to protect the eggs within it. 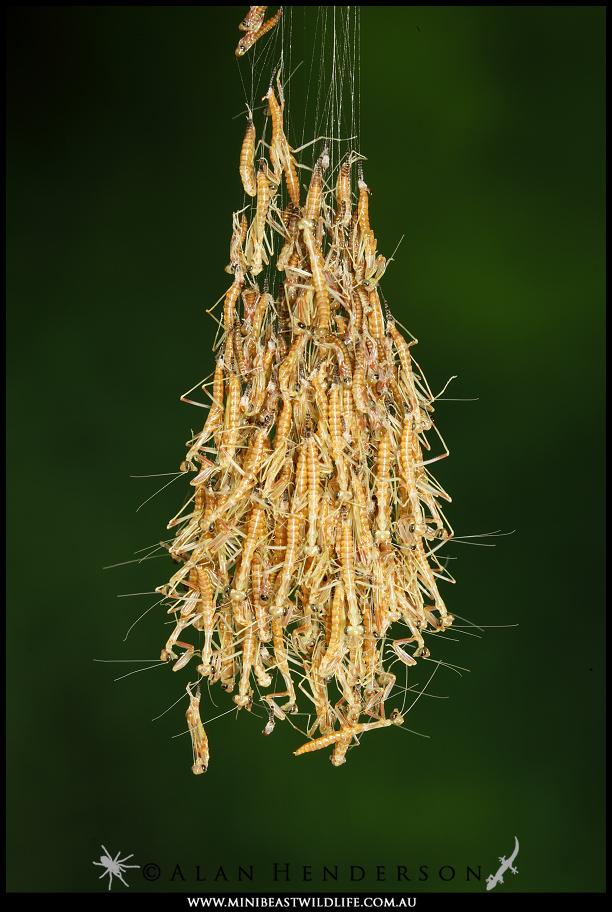 A mass of hatchling Giant Rainforest Mantids danfling below their ootheca.

One often recounted fact about praying mantises is that the female will eat the male during or after mating. While this is true for many species, not all behave in this way. For the males that do get eaten, their nutrients are valuable to their partners to assist with the development of the eggs. Their partially dismembered bodies instinctively continue the mating process – some males may mate for over 12 hours without heads. 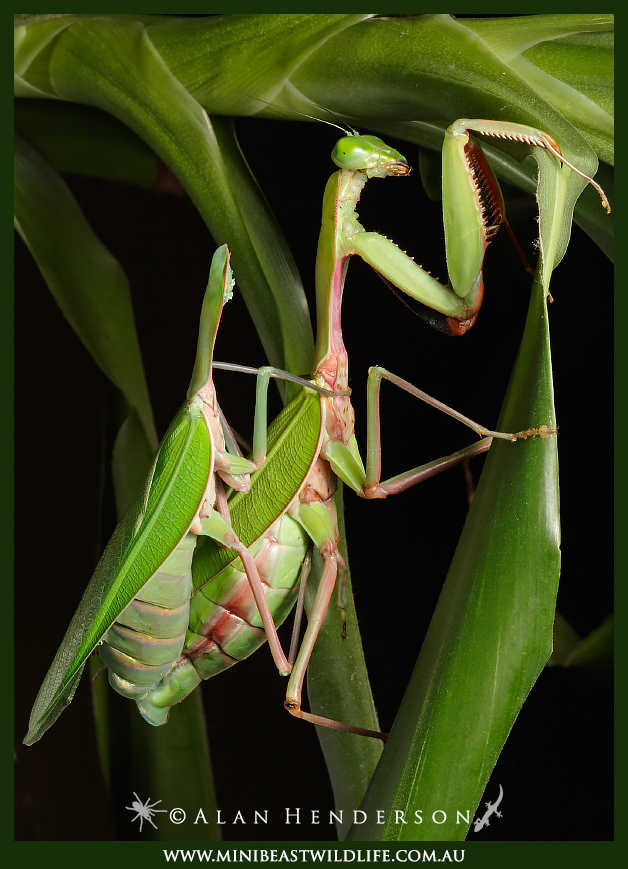 Giant Rainforest Mantids mating – the female has eaten the head and front legs of the male, but he can mate on for hours automatically despite his loss.

Minibeast Wildlife breeds a number of species of praying mantis for sale as educational pets, zoological display animals and for behavioural research within universities. Those currently available can be found in our BugShop and those breeding will be listed on our Breeding Room page. 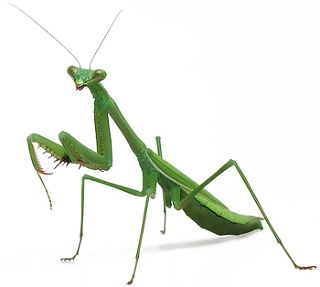 More images of praying mantises can be found on our photography website.