Hercules, the moth of myth

You might know Hercules as the Roman god famed for his strength and heroic deeds, or even from that Disney cartoon with all the songs. You’re remembering right – he’s not a moth in either of those – but there is also a large insect that bears his name. 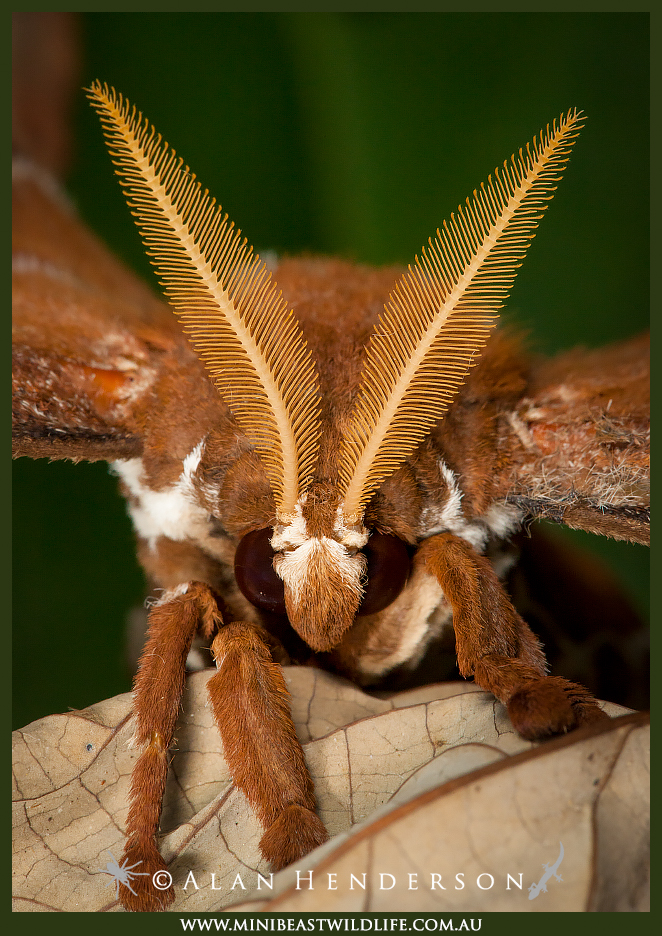 Face on with an adult male Hercules moth. His large, feathery antennae enable him to detect female pheromones over large distances.

The Hercules moth (Coscinocera hercules) might not have super strength and a history of heroic deeds, but it does grow to an astonishing size. Adult female Hercules moths have a wingspan of around 27cm, consistently charting as one of the world’s biggest species of moth. The largest Hercules female ever found was reported to have reached 36cm. Males are more lightly built and have long tails on the hindwings. They are native to the rainforests of northern Queensland and New Guinea.

Despite reaching a gargantuan size, these adult moths don’t get a lot of time to frolic around in the trees. Living up to two weeks (and longer than one night if the males are very lucky), as soon as they emerge from their cocoons, it’s business time. Without mouths, these moths are not distracted by pesky necessities such as feeding. Instead, the female gets to work releasing a potent airborne perfume (pheromone) that attracts males from a distance. Detecting her advertisement, he flies to find the waiting female, mates, and his story is over. 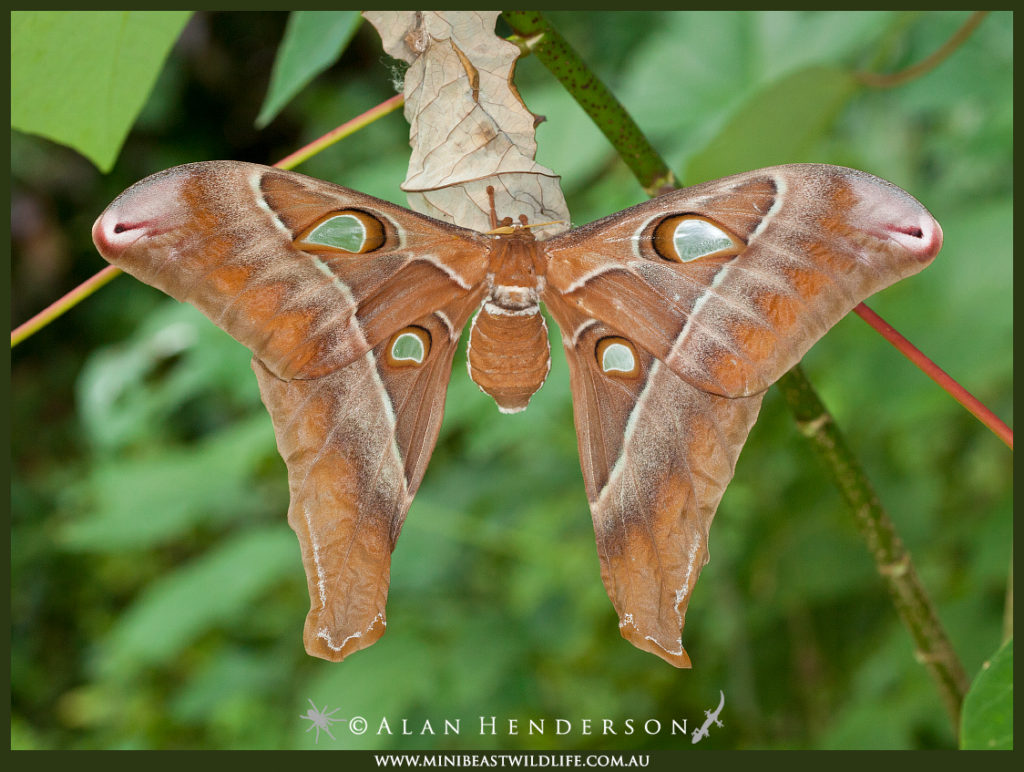 The female Hercules moth has a massive set of wings, ranking her among the world’s largest moths.

Females produce around 300 eggs, sticking them to the leaves of one of their rainforest foodplants – often Bleeding Heart (Homalanthus spp.). After around two weeks, the caterpillars emerge onto their dinner and begin the journey to the cocoon – a superspeed process of eating and growing and moulting that will take around two months to complete. While the caterpillars start off life white with bristly spines, later stages are stunningly coloured, with bright blue-green bodies, yellow spines and red spots. 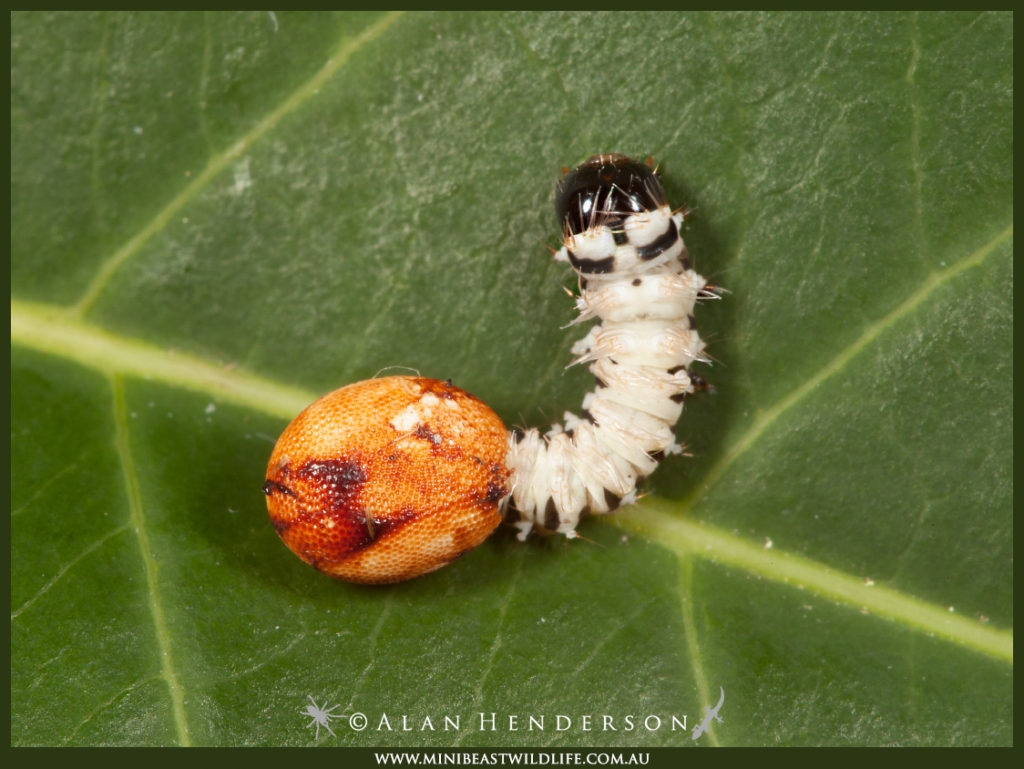 A Hercules moth caterpillar emerging from the egg.

At the end of their larval stage, these caterpillars are so chunky that they can weigh around 29g. This is where life slows down a little for our hero Hercules. After spinning themselves a silk cocoon, it could take a few months to a year or more for the pupa to metamorphose and emerge to begin the cycle again. 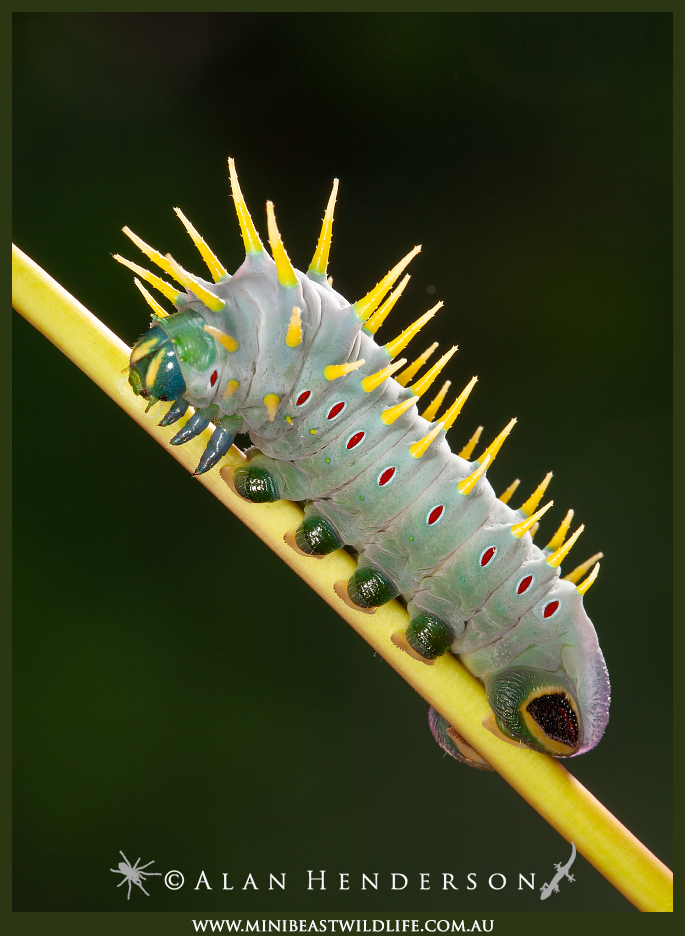 The stunning colouration of the Hercules moth caterpillar.