It’s that time of year again at Minibeast Wildlife when we are pairing up many of our spiders, particularly our tarantulas. In the wild from late summer through to early winter males are roaming looking for mates. This is typically the time when we pair up our tarantulas to breed.  This year has gone very well so far in terms of successful matings – and also for the survival of the males! During the courtship process, the male tarantula must identify himself as a mate (not food) by a series of tapping and vibrating moves as he approaches. Each species has its own particular courtship moves.  While sexual cannibalism isn’t super common in Australian tarantulas, when introducing a male into a captive female’s enclosure there is always a risk that if the male doesn’t realise he is in the presence of a female (and begin courting) that she will make a very quick meal of him. Females more heavily built and more powerful spiders, so the males need to be on their game. We ensure the males are aware of the female before they are let completely loose in the enclosure by exposing them to the chemical attractants (pheromones) that the females naturally release. 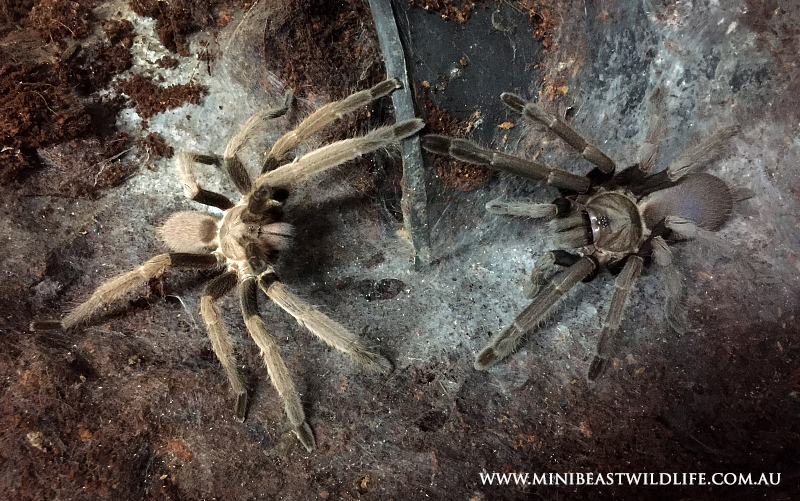 A pair of Australian Tarantulas (Phlogius sp. Kuranda) during courtship – the male is one the left.

Most of our female tarantulas will begin laying eggs around September, and hatching may begin near the end of October depending on when they were laid. Some egg sacs are left with the mothers to incubate and some are placed into our specialised ‘mechanical mum’ incubator which gently rotates the sacs as the mother spiders do. The reason we do this is because some female spiders decide to eat their eggs for reasons we are yet to fully understand.

To see these how these spiders mate check out our Australian tarantulas mating video.

To learn more about these spiders and other Australian species, download Spidentify from the App Store or Google Play.