Here are some of the Australian Leaf Insects Phyllium monteithi we have been breeding. One of our populations originated from a single female specimen that Gerhard Hillmann and myself happened across after Cylone Ita last year here in Kuranda. Gerhard spotted the adult female sitting upon a Golden Penda (Xanthostemon chrysanthus). A rare find as she was only the second female specimen ever found at the time. The first was also found in Kuranda back in 2012. It was found on Cape Ironwood (Gossia floribunda). The offspring from Cyclone Ita female have been kept on Golden Penda and are exhibiting a wide array of colours. The other main food plant we use is Brush Cherry (Syzygium australe), which is most likely a wild food plant also. 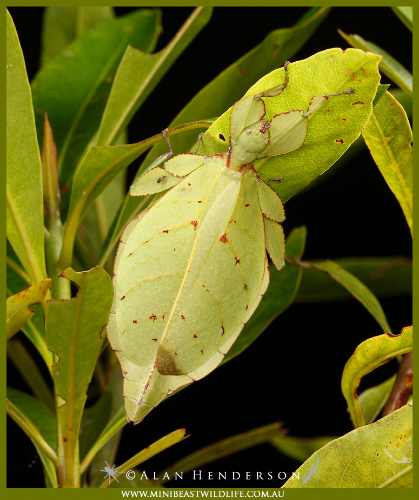 The wild female Phyllium monteithi found just after Cyclone Ita in 2014. Her offspring have been observed at the same location since.